Where do you stay at? 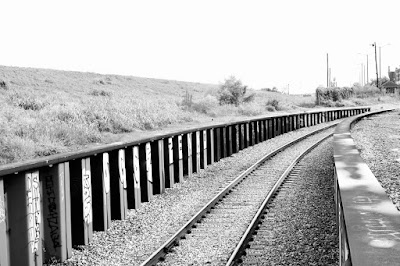 "What cannot be exchanged. The most translucent. The most clairvoyant."
-M. Buzzeo

The dream is that sound experiences time.

i had no idea how much happiness
existed here. but it is bound
to suffer. we have to let go all of it.

you let go. ready or not.
time is fast.

The Bywater was one of the first areas to witness gentrification. Now, it is hard to visit the neighborhood and imagine anything other than a hub of young, hip transplants, but this colorful area once was pallid.
A manager at a local store, Henry recalls that nearly two decades ago the Bywater was entirely different, "It was mostly older, black, and retired folks. A lot of families. A lot of people that had never left. A lot of people that had lived for generations in the same house or on the same block. All of the houses were white-painted white with green shutters. A lot of rundown places-and not many businesses left."
Despite how it may appear, the Bywater has not been completely glossed over yet. The local sports bar Markey's has existed in some form or another for at nearly 120 years. In 1947, it adopted the name Markey's, which has stuck until today. Many frequent the bar for food, drinks, and sports games, honoring its history and traditions, perhaps without
realizing it.
Source: https://www.whereyat.com/a-requiem-for-the-most-changed-neighborhoods-gentrification-in-nola

However, previously black neighborhoods on higher ground—including Bywater, parts of Treme, St. Roch, and St. Claude—"are now majority-white or moving in that direction," according to the report.
Source: https://nola.curbed.com/2016/9/6/12821038/new-orleans-gentrification-report

Over 50% of renters in New Orleans will face eviction in August, 2020:

“A significant proportion of rental housing in New Orleans that is vulnerable to eviction is covered by the CARES Act,” Breonne DeDecker of the Jane Place Sustainable Neighborhood Initiative told The Lens. “So it’s possible that some of the reason we’re not seeing the wave of evictions yet is because landlords are waiting for the CARES Act coverage to expire.”
Source: https://thelensnola.org/2020/06/29/evictions-resume-in-new-orleans/


They did not want to rebuild us.

We built our homes. We returned and worked. We held up the tourist economy. We raised our children. We created community.

And 15 years later, they tried to take it all back again.


"People who have something to hold onto can relax. People with nothing have to hold on very tight."
-Dancing in the Flames 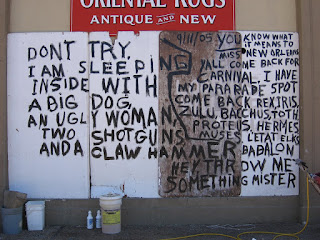 you get to the edge and maybe you aren't alone. maybe clearer. maybe succinct. how can you believe in the facts of who you are if it's based on memory. it's not a hard line you take to pulling. such a hollow threat, to say that i'll leave this life behind. but here, a clutch of less of everything for everyone. what beauty are you attempting to overthrow. music in place of your heart. for the heart cries for what it longs for. the  missed moments of before, and we never return. what's the word for dangerous now in this world. is it the "certitude you are insane" (Notley) and how many times to turn over that surfacing. a caught net. a strapping. what you can take from the channel is that she is certainly insane. it's only beautiful in a passing way.

our lives are moonlight

Resource:  End of the World
https://youtu.be/WxeGC0ZzjtI

Posted by Solid Quarter at 3:52 AM