Cultural Misogyny Scrolls You on Tinder

I write a lot about the experience of desire, attachment and online dating both in poetry and in essays and in general online. I listen to a lot of men and women complain about the aspects of online dating, commitment, and relationships; and I read a lot of other writing (mostly geared towards women) about how to get a partner, keep a partner, play the game, etc. What I don't read or see a lot about is talk around the bigger picture of how our ideas of love shape attachment, shape relationships, shape our experience of sex and dating and how this translates to a world where we either choose to value and champion love or we don't.

When bell hooks writes in her book All About Love that we can't both have casual sex and casual relationships and want a world filled with love as well, that we can't engage in one act of treating people as though they are expendable and also want to have love in our lives: I believe this is true. But I also am a product of a culture that didn't raise me on love, a marriage that wasn't built on love, numerous relationships that did not hold love, and an addictive cycle of recreating abusive situations that mirror what my early attachment template named love. It took me a long time to even understand that what I thought was love, was in fact not love, and that what I wanted was something I didn't even know about, but I was keenly aware of the lack and not my fantasy and my fiction of what it would be when it arrived. I've been on Tinder watching and tracking abusive cycles of behavior around men and thinking about how that positioned me as a woman. This particular example involves a white hetero male- top of the food chain- and me, a bisexual white woman. But even within those narrow parameters, I want to show you how cultural misogyny is insidious and how it thrives on shame and anger and hatred, because if you've been paying attention, you know that the microcosm of what occurs in private between two people is a small stage of a macrocosm effect of how we treat humans. It is inside of our humanity, it is an infection inside of our species that is tearing us all apart. See we can't relate to the top of the food chain, the most powerful majority in this culture because they both hate and desire the same object: And it's killing all of us.

It is KILLING ALL OF US. And it is not our (read: any person of color or female identifying gender or nonconforming gender or sexual orientation not defined as exclusively straight or child or not identifying and passing as straight white man)  fucking job to fix this.


STRAIGHT WHITE MEN:  THIS is your fucking job to fix.

Context: I matched with this person, a straight white male, on Tinder on Monday. We texted a bit throughout the day and he told me he wanted to meet someone to fall in love with, he also wanted me to send him naked pictures, and he probably sent me about 40 texts or so throughout the day. He sent me an unsolicited picture of his penis during this, and I sent him no naked pictures in return, which is why probably, on Tuesday, he sent no texts until 8:30 at night.

And I want to be really clear here before we begin that in no way am I framing him as bad and me as good, him as aggressor and me as victim, him as some lust rager and me as an angelic virgin: See we both lose. We are both losers in this game that we didn't sign on for called cultural misogyny. The game makes men feel powerful and women weak. It offers the illusion of safety and protection for an elite few under the guise of shaming and diminishing the rest of us. But it's a lie.

We all lose. If you are a man and you desire what you hate, if you want to possess what also sickens you and makes you think "weak" and "vulnerable" or "sensitive" than you have already lost.

If you drank the cultural misogyny kool-aid that tells you to "grab them by the pussy," you did so at the cost of your humanity. And maybe you don't realize it yet, but it was a high cost to pay.
And if you are suffering, it's because you keep paying. Not because women won't fuck you or love you or listen to you or understand you.

You paid the cost of your humanity to be on top in the game. 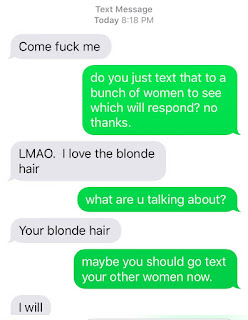 "Come fuck me" is the battle cry of broken men. Cultural misogyny has created this chasm between "men" and "women," this binary reductive narrative between the have's and the have-not's. And it should come as no surprise that this is the root of resistance to any gender noncomformity. You can't have a top and a bottom without clear differentials of power. Am I right?

The reality of blurring the lines between "male" and "female" classifications means cultural misogyny would have to up its game. Who holds the power, well clearly straight men still, but against whom. Against people you actually don't want to fuck. Against people you might want to fuck. Against people who don't want to fuck you.<------- p="">
See cultural misogyny is a lazy philosophy: it was created by men to oppress women. But if we don't know who the women are and if we have others we want to oppress who aren't women,  if we have men who won't be oppressors, who don't hold power in the economy of "straight male" then what?

If you are a straight white men feeling really attacked right now, welcome to the bottom of the game. We've been waiting for you.

is the battle cry of a broken man.

It holds the illusion of a demand. But it is begging. It is begging to be touched and seen and held and loved. But it doesn't know the language. It doesn't even know the definition of the emotion that is causing this lack: It's been told, it's sex. It's been told it's desire.

And none of it is true.

Come fuck me. And the slipperiness of misogyny is that women answer the call.

They say Come fuck me. And a woman will come.

Because she's been led to believe one of two things:

This is as good as it will get and at least I'm not alone.
Or
Maybe I can change Come Fuck Me to Come Love Me.

Connection is what makes us human. The ability to connect. The ability to celebrate each other. The ability to feel safe with one another. Love is the strongest, most powerful emotion in the world. It has the power to give us what we most need, to heal and create and be our best selves. And we are so afraid of it. Ask yourself, why are we shamed into being afraid to love?

Who does that serve?

How are we framed if we say: Come Love Me.
We are framed as weak, vulnerable, needy, clinging, emotional, effeminate.

Nothing could be further from the truth: Do you know the emotional bravery and resilience it takes to honestly say to another being: come love me. 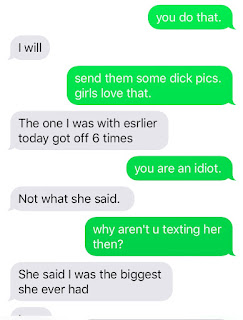 Pornography instills through imagery the idea that sex is power. That the ability to fuck and have a big dick somehow translates to having some power.

Do you see how ridiculous this set up is?

No one threatens another person with their ability to love.

No one says on the offensive: I loved the shit out of the last girl I was with. I loved her so much she knew she was respected and cared for consistently. I have a big 9inch heart that I use to just love and respect all beings.

But a big dick is a weapon. The ability to fuck someone is a weapon. We say you're fucked when it's not good. See sex in this sense is not sex: It's violence and it's abuse.

And Cultural Misogyny is all about normalizing abuse. 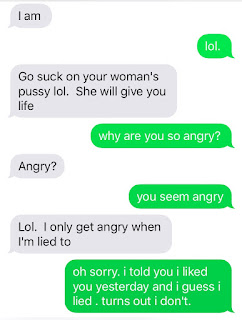 Cultural Misogyny protects men. And women shelter under the men who are protected by cultural misogyny because they've been told they will be protected too. That's how abuse works: It lies to you.

Being a bisexual woman is sexy when it feeds a man's fantasy of multiple women he can abuse for his pleasure. But he can also slip it off and use it to pin you to the floor. Because if you are not a straight white man in this scenario. You lose. 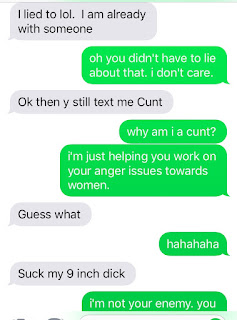 It would be easy to dismiss this person as not very bright. As someone clearly struggling with some anger issues and rejection issues and basically acting out like a small child when not getting their way. And that's all true. But what is also true is that this is a man, not a child.

This is a man who is a father to two sons.

This is someone who is teaching future men how to treat women.

This is a man who has a mother and who has sons who have a mother, and presumably some love was felt for one of these two, perhaps both at some point. 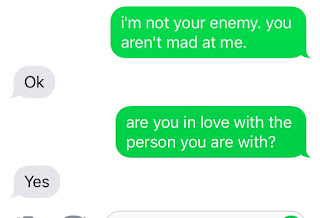 It doesn't matter if it is a truth that this person is or is not with someone else.
If they are, clearly what they feel is not love as their actions do not indicate love.
If they are lying, they clearly do not understand love and so lack it in their life.

And at the end of the day, the person you are with is you.

That's the only person you are ever with.

And if you hate what you desire, then you hate part of you. If you abuse what you also want, you are abusive and you are in exact opposition to love.  The only truth in all of these statements is the bald faced lie of being able to be in love with anything in a state of cultural misogyny.

You cannot love truly what you cannot see clearly.

And right now, men: You cannot see us.

You are blinded by the hate fed to you as power, fed to you as privilege, fed you as safety and "locker room" talk and women being "so sensitive" and how strong you are and how you don't need to "feel" things or get too "attached" or talk about your "feelings."

ALL of these narratives are fucking stupid: STOP WASTING OUR TIME

Men: Is this the world you want?

You have the power to stop this. It's the only power you have.

But it will happen if we keep holding up the smallest messages we send to one another in private as ok when they really are abusive to all of us.