Are there many translations for what we are? 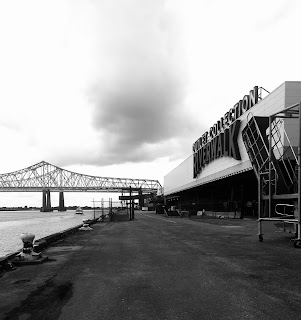 There were once things I could not imagine too, but on a long enough time line you will experience all of it. Death is the blessing that binds us.

“if there’s a time line from violence, we can take breaks from it”   -Notley

“once we were sick in our bodies, now we are sick in a body of light” –A. Boyer

The dream is that sound experiences time. We are all meant to learn the same truths.

I remember riding across the Mississippi river suspended in this metal box, and thinking at 8 years old about dying.

The poem acts at the level of symbol, which is to say it is less about translation and more about transmission.

But what of the image. The photograph acts as substitute rather than as memory, which is to say memory is a fiction and the photograph surpasses real.

The most important part of any ritual is to record a log of process.

And if life is the ritual, then poetry is a record of my trespass.

What I am trying to say here is that there should be no fear in the chaos. It has only appeared that things have been more or less chaotic when in fact, life itself is self replicating.

“In contrast, the traumatic memories were disorganized… remembering the trauma with all of its associated affects does not… necessarily resolve it.”

-The Body Keeps the Score

i get so castled
shiny air
this enemy i stated,  i congressed. i sensate
from beneath this canopy of doubt
we traveled: when you pull up the screens
& plug in. what name do you fly under
fnd me _ERAPH  deep in  t h e c o d i n g

i built a Pegasus & it was not a myth
or beast, but a way to see anything

Riverwalk Mall in New Orleans on the Mississippi River 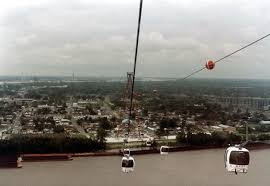 [World’s Fair]
Plagued with attendance problems, the 1984 Louisiana World Expo has the distinction of being the only world's fair that has declared bankruptcy during its run. Many blamed the low attendance on the fact that it was staged just two years after Knoxville's 1982 World's Fair just two states away.
It also has the distinction of being the last expo held in the United States.
Source: http://www.expomuseum.com/1984/

The signature attraction of the 1984 Louisiana World Exposition held in New Orleans was MART (Mississippi Aerial River Transit), a $12 million aerial gondola transport system that connected the fair site on the East Bank of the Mississippi River with the West Bank (Old Algiers). For the price of a $3.50 round-trip ticket, fair riders were shuttled 2,500 feet across the Mississippi River in one of 53 six-passenger, teapot-shaped cars strung from cables suspended 320 feet above the river. After the fair, the gondolas briefly became part of the city’s mass transit system.

we can put the suffering on pause. what did you want from such a little life. you can’t hold any more than anyone. our great unhappy. the way we refused to look at the stars. the way we confused what is felt for what is true. take out all that you know & let it perish. here is no going forward, unharmed. so go broken or don’t go, she says. to say as the poet i have a say. you have to let go the distraction of other people. do you even notice how completely gone i am. [redacted] only wants what she can’t ever have. wants the world exact and still to bend around her like a newborn moment. to be awash in love as we will never be again. only death offers. is today suffer. is today gratitude. is today numb. is today jealousy. [          ] did not want to be saved, pulled out or escape. is today casket or cathedral, girl. there’s no reason for a HUNTR to retrieve a dead thing. it’s death to reach the hacker, she says. but who can believe her.

Notes from the Channel: 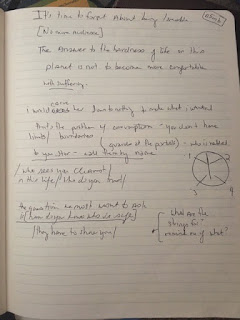 we must create a ritual and process whereby a miracle is transformed
we receive: as wave or particle [we shall be of one mind]

[shift]   ::  the speed of light in a vacuum is a universal constant

Posted by Solid Quarter at 3:51 AM