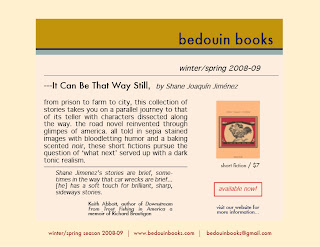 SQ: What will readers find coming from Bedouin Books Press?

md: readers will find 3 new books released this winter/spring season. the first will be published this month, a book of short fiction titled It Can Be That Way Still, by Shane Joaquín Jiménez. the upcoming two are books of poetry from liz collins and Scott Alexander Jones. also bedouin books' semiannual journal swap/concessions will have a new issue out in the spring focusing on short non-fiction.

SQ: Why did you want to start publishing?

md: i started publishing my own poetry under the bedouin books label in San Francisco, in 2003. i would make them by hand and consign them with City Lights Books, and sell a few now and then. it wasn't until 2007, when i wanted to produce a literary semiannual, that i decided to reinvent bedouin books as an independent publisher of works of literature in addition to the journal. now bedouin books hopes to put out 6 books a year from emerging writers in a small pocket format, handmade and covering a cross-selection of genres.

SQ: swap/concessions 3 focuses on short tales. Any reason for that particular genre?

md: swap/concessions is a way to test the genres in a digestable format. 3 writers come together with 3 works each. swap/concessions 3 features short fiction, whereas the first two issue featured poetry and comics respectively. i want bedouin books to expand to emerging writers who write in multiple genres.

SQ: Can you describe what's on the horizon for Bedouin Books in four words?

Below is a brief excerpt from the newest release from Bedouin Books. To order this book or the latest issue of swap/concessions please visit: http://www.bedouinbooks.com/

‘Hundreds of Miles’ by Shane Joaquín Jiménez from his forthcoming book of short fictions, It Can Be That Way Still published by bedouin books.

I knew a man at Briscoe who went on to death row. Only man I ever knew who went that way. We was celled together my last year incarcerated. He said he was a shaman, told me so out of his own mouth. Said he was the last of his people, the Quapaw tribe, but the ghosts of his ancestors walked this earth and talked to him. They showed him things of this world and the next.
Two, three days before they let him out, we was together in the mess hall. Two days. Suddenly, like it was just any damn thing, he took the tin coffee cup from my hand and overturned what was left in it onto my shoes. He looked at the grounds at the bottom as if he was reading the Sunday paper.

‘When you leave this place’, he said finally, ‘you go home. You go where you come from and you make peace. Any where else for you is death. And beyond that is finally Hell’.

The shaman himself went back home when they set him free. Had a job in a supermarket waiting for him from the parole board, stocking shelves on the graveyard shift. It was union and he got weekends off. Wasn’t long before he found a girl. This was down in Neches. This girl was fourteen years old, the paper said. She was in eighth grade. Wanted to be a dentist when she grew up, if you could believe that. Her daddy said she knew the name of every tooth in the human head. What that shaman did to her before he butchered her, and then after, I won’t repeat. But from what I understand, they never did find everything.

That shaman was given a small trial in Lubbock County and then sent on back to Briscoe State Penitentiary. They sent him to the row. Fried him shortly thereafter. I always wondered if his ghosts ever let him know what was coming. Maybe they didn’t have the heart. Maybe they just let him enjoy his damn coffee. First thing I did when they let me free was get as far away as I could get. I wasn’t concerned with where I ended up, how I got there, nothing. I went in straight lines, hundreds of miles off, until there was nothing that was familiar around me. I didn’t think once of the getting back.
Posted by Solid Quarter at 7:35 AM No comments: