"I don't want to be the person who always knows anymore..."

We can say anything here. Feminism is like poetry. The only people who care about feminism are feminists. (Have you ever noticed when men complain about what "feminism" has done to women, they actually mean "pornography." Why do they always use the wrong word? )

Blood Politics… you rarely see women critiquing each other on how to bleed.

It’s why we have to go back into the menstrual hut… it might be the last place where we can speak.. it may be the last place where we can create a language not in relation to… not in contrast to… not under the gaze of…men don’t care about how a woman bleeds … so women don’t perform it for them. Men care when the blood means, I can't have access to the hole I want, the vagina becomes a site of biology, a reminder of the power to create life and a mess. Sexualizing a mess is only fun when the woman is hetero, quirky, cute...kind of like you, Chris, in the show. How would the narrative of a hysterical woman work if you had been not attractive, Chris? If you had been found wanting in the arena of sexual desire because your body did not meet the standards? and here we are at the critique of it, woman against woman. To enter this, we have to then devolve into a performance of who can ever voice anything safely and it's slippery and it's necessary and it's messy. Like blood, our familiar--

we need to back to the smear

we need to back to the stain

we need to back to written in blood, the screaming of what I unmanifest

"Art, like God or The People, is fine as long as you can believe in it" -"I Love Dick"

Chris, what I think is that we spend too much time tearing each other down… we fall over and over again for divisiveness which pits women against each other while men step back and say… see, this is just how they are: Catty, emotional, jealous, dramatic. hysterical.  We don’t even see the coding: We just embody it. It is written into songs and stories and poems and films and cartoons and ads and conversations and everywhere you look… you’ve been told how to be a woman. And in none of the models does that exist except as in relation to and less than…

think about that… Power envy.  The little girl looks over and notices that the boy has something she doesn’t have—power.

And all of her life, she spends in relation to her lack…

I've been thinking a lot about specialized love. I finished your Kathy Acker bio and was undone by a sentence near the end of the book where you stated that Acker was alone a lot of the time. And then while she is dying that these words came from her: "I made all the wrong choices, wrong boyfriends, wrong places." 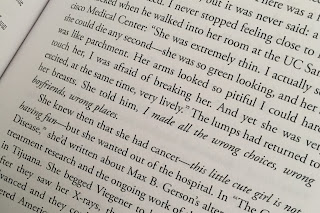 Isn't that the danger of this idea of romantic love? This fiction as Lacan posits that we fall in love and create this narrative around this specialized fairy tale. We pour so much into it, and it's a lie that traps us. To transcend it though, we'd have to give it all up. Love for your kid, love for your parent, love for your dog.... could you sacrifice that and learn to love everything deeply. Could you break your heart open that much, that it isn't just for the few... it isn't just rare and unique and scarce but it's normal and every day and wide open and vast. To fall in love, an every day experience with everyone you know.

Where does loneliness exist in a world where everyone loves you?

I want an answer. I'm not leaving the menstrual hut till we all do better.

Posted by Solid Quarter at 7:22 AM No comments: