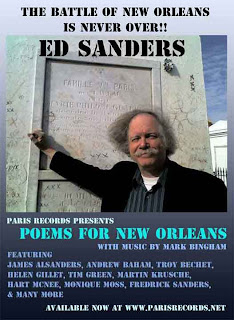 It seems that Gov. Jindal has secured enough MRE's to feed 350,000 people in the event of a hurricane heading straight for New Orleans this weekend. Since that end is covered, may I suggest grabbing your copy of the new Poems for New Orleans by Ed Sanders (North Atlantic Books), previously released in CD format and now available for your reading pleasure. It's a known fact the intonation of these poems aloud before your hurricane altar has the power to cool the gulf waters and turn the winds in our favor. Be prepared! Water, batteries, Sanders!
Posted by Solid Quarter at 6:46 AM No comments: 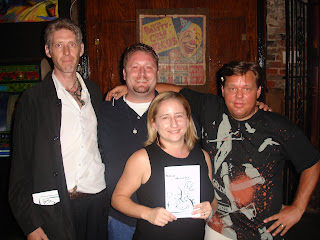 The Solid Quarter release party was a huge success. Thank you to the readers and everyone who came out and picked up a copy of the second issue.

There will be another reading for Solid Quarter at Fuel Coffeehouse, 4807 Magazine St. on Sept 5th at 7:00 Pm.

Posted by Solid Quarter at 6:33 AM No comments: 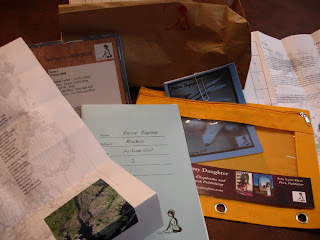 This photo shows my collection of Brown Bagazines. On the left is issue 5, the Borders issue, laid out and folded like a map with cross points for easy poet/ poem referencing. Issue 2 is the blue essay test booklet, no exam anxiety here just this issue's manifesto theme. There is the back-to-school issue (4) that comes in the handy trapper-keeper see thru folder for better poesy viewing. At top is the namesake of this magazine, the brown bag distribution center of issue 1. Leaning on the brown bag is the CD that came with the songwriting issue (3). Not only do the presentations of each theme centered issue continue to amuse, but Brown Bagazine has managed to create a strong presence in its first five issues by continually presenting charged and innovative work.

In issue 4, Rowland Sufi's A Drama breaks down the structure used in writing a dramatic play and inserts it into the narrative so that the text begins to resemble a complicated mathmatical formula. The solution may be attainable by confronting ideas of organization and narrative structure; it's possible that all of the bard's great plays were created using this formula.
Of particular note are Tim Armentrout's prose poems in issue 5. From stagnant ice, "it's a question of how empty space insulates itself. conversations above too chilled to hold anything in. cold shoulder isn't even the tip of the iceberg. presumption like a fork in the socket of your simple life." All three of Armentrout's pieces build on these turns in the language as they layer subtle images with a dynamic rhythm producing a momentum that pulls the reader along for the ride.
In Solid Quarter fashion (four questions), we interviewed the editor of the innovative and wonderfully packaged Brown Bagazine: Amy Lynn Hess.

Solid Quarter: What made you want to start a literary magazine?

Amy Lynn Hess: I was casually flipping through Poet's Market at the end of Naropa University's Summer Writing Program in 2006, and I realized there was a distinct lack of grassroots, easy-does-it, tactile, visceral, labor-of-love-type journals that were promoting the poetic conversation. It made me want to start a literary magazine to challenge the very corporate idea of what a literary magazine or journal really is. It is a place for current writers to share their own current ideas - glossy papers and perfect-bindings not required - just thoughtful and sparky writing that begets more thoughtful and sparky writing.

SQ: Where did the idea for a magazine in a brown bag originate from?

ALH: At its best, my work is blue collar and unpretentious. There's nothing more blue collar and unpretentious than a brown bag. The link between brown bags being symbolic of the type of work I appreciate and being a marvelously inexpensive way to mail the kind of work I wanted to collect came to me one night in Boulder as I was tossing around on a pull-out loveseat under a borrowed sheet and stolen quilt. I just couldn't calm my monkey-mind after that, and from there the mission statement emerged.

SQ: Why do you work with themes in your issues?

ALH: Various writers asked for themes last year as they were planning submissions, and I responded by adding specific subtitles to each issue this year. I think it has helped move the literary conversation forward. When all of the submitting writers are thinking along the same lines, I can edit a journal that moves as though a type of conversation. Writers also have the chance to respond to one another later in the season, in the "literary conversations" issue. It's very important to me to offer a space where writers can converse and respond to one another through fiction and nonfiction poetry and prose. I also think it has been a helpful way to guide my own writing as the year progresses.

Brown Bagazine Subscriptions, only $15.00 for 4 issues! Buy through PayPal on the Gypsy Daughter website.
Posted by Solid Quarter at 7:40 PM No comments:

A short note from editor Michael D'alassandro about all the great things happening over at Bedouin Books.

"greetings booklovers----
bedouin books, independent publishers of handmade works of literature and poetry, fiction and non-fiction is now open for business. browse the various features this website has to offer:

the in-print and online features include:

some future features will include:
- a reviews and literary criticism page
- online quarterly poetry magazine
- excerpts of all published works

as editor, i began this 25-year publishing project in 2003 with the promotion of my own writing. now, with the expansion of the website and a growing list of titles and authors, i hope to grow bedouin books into a fully functioning independent publisher. thank you in advance for taking a look at the website. bedouin books is taking orders, see website for details.
sincerely,
michael-----

m.d'alessandro, editor"
Posted by Solid Quarter at 5:50 PM No comments:

The fabulous Willy Gantrim on guitar singing for us on Thursday evening. 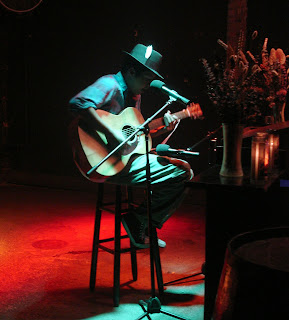 Hannah has left us. She made many pies while she was here and broke many hearts, I hear, in the Bywater. Word is she will be back this way in October and using her secret key to enter the kingdom of babylon. Here is a photo from her reading Thursday night. 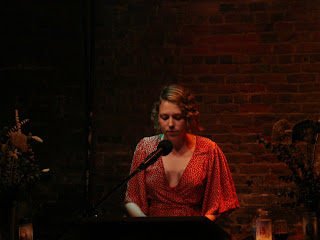 And I have been learning to set type and run the printing press (below) with the owner of Verna Press, Peter Anderson. Here is a photo of him cleaning the rollers as we prepare to change ink colors. We finished making a small broadside of one of my poems last week. Next, we move on to making a larger broadside with an image using a color we are still trying to create. Everyone says printing presses are addicting, and they are right. 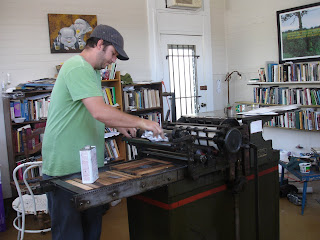 Here's an old photo of a collection of oddities. Painters and poets: (L to R, photo by poet Lenny Emmanuel) Painter William Warren, Poet Danny Kerwick, Painters Tasha Robbins and Herbert Kearney, Poet Dave Brinks, Painter Romano Zamprioli and Poet Jimmy Nolan. As the small date indicates, one year before Dave and I even met. And now nearly half of the artists in this photo gone from New Orleans and sorely missed. I'm posting it to show the wonderful host of this evening's art opening Danny Kerwick who opened up his studio, Simpatico Studios on Magazine to showcase some beautiful artwork by Pat Kaschalk and handmade books by himself. Dave and I made a nice purchase, an image I will share soon. My review of Kristin Prevallet's I, Afterlife: Essays in Mourning Time is up at Tarpaulin Sky.
They are also reading chapbook manuscripts now, so check it out and submit to an awesome press.

Posted by Solid Quarter at 7:15 PM No comments:

Tuesday's dinner with our guests Hannah and Willy as well as lovely painter Daniel Finnigan consisted of salmon and softshell crab on a bed of crayfish pasta. Also included were grilled squash and other chef Brinks' secrets. If this poetry should not pan out and New Orleans becomes a dry town putting the Gold Mine out of business; we will be able to fall back on Dave's unrealized dream of opening a restaurant. In fact, we'll just use the same building and call it the Golden Mustard. I've been reading C.D. Wright's new book: Rising, Hovering, Falling. It's a pleasant break from the Leprosy in America and imperialism and leprosy books that I am also engrossed in at the moment. We're deep in house construction again as we build some bookshelves to hold our obsessions in place.

And here is the piece I read at the open mic last night. I am trying to come to terms with the amount of damage this oil spill has done to our already traumatized ecosystem here along the river. I'm not sure what these terms resemble though.


What if there was a place where unwanted people could go to be put away in total anonymity united by their diagnosis. Think of the bodies in their lingering daydreams crowded skin to skin and all the end lines delivering to their own peculiar disasters: slavery, work camps, exile. Removal of any large group of people is problematic; the goal is the hasty evacuation of a city hours after the call is made. This is the loveliness of fiction. For some, removal is another form of torture and death. So, the young doctor administers a sleep aid and is called a murderer. Several will be blamed for the murder of a few while the murder of many is protected by the legal status of immunity. Committees designed to protect enact their right to be faultless for faulty designs, faulty responses; there is no fault it turns out that can be premeditated. Leprosy is like a storm; something still feared even in the face of knowing that you may survive it. But this depends on the ability to construct a cohesive narrative. One both navigable and lightweight as you will have to carry it downriver. And then, here too, turn away from the oil spill’s gleam on the water as it coats the exotic nature of your phrasing: what you would garnish for explanation. Gather in the hull this delicate ecosystem for safe travel to a foreign land. It was never about oil for these small beasts; all water safe from the threat of spills and their antecedents. Imagine trauma like a boat passing by unnoticed on the clipped wing of the horizon.


Posted by Solid Quarter at 7:31 PM No comments: