I did this video review for Horsless Press' OPEN Review section.

If you have never checked out OPEN reviews, it is a wonderful new space for ongoing dialogue between poets. Instead of the traditional review, OPEN encourages the intimacy of the letter format, so that writers can discuss their personal engagement and experiences with the poem. They also encourage NOTES showing how a reader travels in the text. Thanks to Jen Tynes and Michael Sikkema for opening up this new space for interchanges and exchanges.

We are interested in reviews that overtly, intimately, intensely, and interestingly engage in conversation with authors and their texts. We are interested in reviews that can stand alone. Reviews submitted for O P E N should be written as open notes (250-500 words) or letters (500+ words) to the author(s) of the reviewed text. Open notes and letters that address the text itself or some animal, vegetable, mineral, character, or characteristic of the text are also interesting to us. We are excited by reviews of events and multimedia reviews. Notes and letters will be published here on an occasional basis.

I decided to experiment with my first video review of a book in tribute to j/j hastain's book,  "new forms and meditations for the pressurized libertine monk" (Scrambler Books, 2012). I filmed this at our Tao Farm, and then tried to do the voiceover in one take to adhere to the idea of having a dialogue as to what arose for me in reading the book. I had a few notes on hand. But in the spirit of meditating on the lyrics, I also wanted to be spontaneous and open the book to any page and let the shape of my review be built upon what came to the surface. Hope you enjoy, and be sure to check out j/j hastain's work.

Poet Laura Mattingly's new collection The Book of Incorporation from New Orleans press, Language Foundry, steered by poet and printmaker J.S. Makkos is a beautifully designed letter press and hand bound collection whose construction lends precedence to the form of the poem on the page. Below is an image of a left handed copy of the book, a rare stitched one for lefties. But each book is crafted and bound with precision and eye towards the best format for presenting the moving poems that lie within. Mattingly's poems were created with an eye on the Tibetan book of the Dead and the Egyptian Book of the Dead, both of which she read during the gestation and birth of her daughter. The construction of the book in its oversize format reflects the gravity (and gravitas) of the ritualistic incantation and power of the poem in capturing and containing the spirit of that liminal space between death and life, between coming into this world and leaving it. The circle on the cover reflects that continuity but it also holds within it the sphere of entrance and exit, which is enacted within the woman's body and which in this book expresses itself through the woman's voice and song. 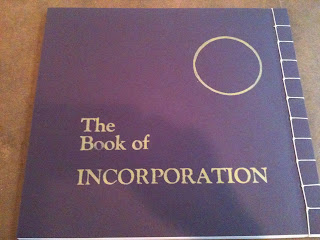 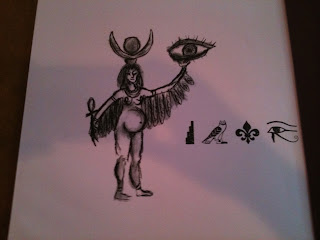 The epigraph tells us that the books of the dead are instruction manuals for the dying and deceased, and in that vein, the Book of Incorporation is an instruction manual for embodying the space between being mothered and mothering, between one and the doubled self, between holding life within and bringing it into the world. The poems are numbered and each title is often a long explanation of the movement that the poem will respond to: in many cases these movements are domestic and personal, but the titles also reflect the manual-like impression that this book means to forward. Enmeshed in domestic rituals of house cleaning are invocations and deliberate soul journeys that are undertaken in preparation for the birth of the new life. Mattingly unflinchingly embraces the dark shadow of pregnancy, which is the realization that the mother's body becomes a host, an other and in that space of becoming a flood of psychic and psychological events take place. One could argue that the dual nature of birth embraces death and that the two become twinned and twined in the body of the mother. Mattingly honors and reflects this in the book rather than turning away; she sings to those who have passed and gives voice to restless spirits who continue to speak and hold presence. 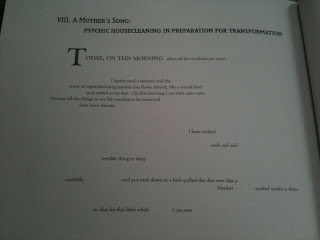 from VIII: A Mother's Song: Psychic Housecleaning in Preparation for Transformation (pictured above) 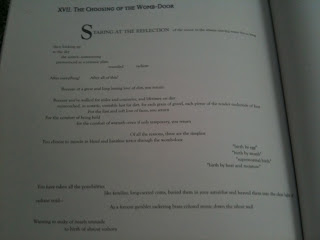 (pictured above) XVII: The Choosing of the Womb Door

"You choose to muscle in blind and limitless terror through the womb-door."

Mattingly exposes all and somewhere between the fantastic notions of mythology and Mardi Gras-like masquerading is a raw, vulnerable quality to the poem which makes one shiver as they read it. It is the whisper of overhearing deep secrets of the soul and, in this case, they are secrets given in love and in openness in order to create a path of knowledge rather than the too often selfish need to confess to appease the ego. Mattingly never loses touch, even in her most intimate moments, with the ritual and mythology that grounds and informs these poems making them more than a personal odyssey and instead a primer of movements from self outward into the inclusion of hosting and bringing forth a new soul. It is this nod to the magic and the mystery of the event that Mattingly so achingly transcribes in all its messiness and fear and longing that makes these poems hard, even dangerous in their alchemy, but they also carve a precious terrain that gifts back to the reader some of the most stunning aspects of being human.

In XXII: Osiris and Isis: In the Face of Fragmentation, A Love Song of Incorporation the poem lives in the landscape of a Halloween night in New Orleans, revelers dressed as Egyptian mythological figures, but Mattingly transforms the scene of "wire-clothes-hanger-ram horns" and wine glasses amid the spectacle and breathes into the event all the mystery of the ancient tale as she reveals:

"I float to his shoulder and plant a riversong in his ear like a seed...

this is how you were conceived, little one
for just one night          this is how I lured your daddy back to me"

It is this ability to weave the personal with the myth, to dance between the mundane and the magical that makes these poems fascinating. Mattingly is able to not just transform the scene making her lover's return worthy of a reunion of Isis and Osiris but she is able to reveal the subtle magic that "looms" in our lives. It is the combing of these two threads, the poet's and the mother's that creates this journey in incorporating the body: the newborn, the newly mothered, and we: the readers, incorporated into the journey and in doing so mirroring our own psychic needs and desires. 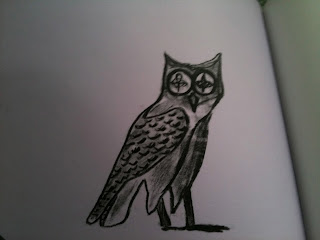 I can't think of a book of poems that does for birth and pregnancy what this book does since the publication of Home/Birth: A Poemic by Arielle Greenberg and Rachel Zucker. That particular text, amazing its own way, looked frankly at the medical industry of birth through statistics, facts, and personal experience; it as well transgresses the polished notion of "happy pregnancies" and reveals in stunning honesty the reality that some pregnancies do end in death and not life. The nearly taboo subject of the mother's odyssey in giving birth to a child who does not live and how to exist in that space is captured in that book in a way that I have never seen paralleled. That being said, the Book of Incorporation could be seen as a text that exists in the same sphere as Home/ Birth looking intensely at the psychic journey that the mother and baby enter into when a soul enters this plane. Calling upon ritual and myth, the Book of Incorporation recognizes the fact of the mental strain of pregnancy and the uncharted waters of emotional complexity that are brought to the forefront in the state of hosting another life. It is a book that remembers that rituals contain the wild state of our beings and provide a foothold in dark places where we must travel blindly.


You can order copies of this limited edition hand made book from:

Listen to Laura Mattingly read from The Book of Incorporation at 17 Poets! in New Orleans: