no one will tell you & how could they anyway, but still you'll feel deceived
no one says, one morning at 41 you'll wake up and your first thought
a memory from 15, and maybe it's because your daughter is 15

the sharp slap of days hurled across your body
that would later be called "refrain" and you
get so drunk one night, someone's boyfriend rapes you
in a back bedroom, you don't remember anything

it's true that you were too drunk to say no, but that's not it
it's three years later when another boy who was there says
over the phone, it was a bet & that's when you understand

the value of your body in a house of boys you called friend
and here is the part no one knows, the deepest secret you keep,
is i fucking won: you bet against my life & you, one of you ended
up dead and you, a string of jail terms, addiction and misery.

you never got out of that place where we strained to grow
broken shipped island of lost toys & i fucking escaped b/c i bet. i bet. i bet
i can survive anything. you'll tell yourself next to the body
of your 8 year old daughter and your dog as the sun rises again over new orleans.
Posted by Solid Quarter at 6:54 AM No comments:

what kind of person are you 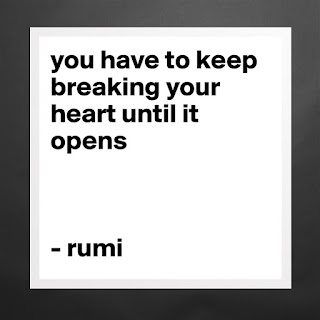 what kind of person are you

empty or is that the way fullness feels to you
soft landing place where i lay my head
or pushing me out kind of person
do you say one thing and think another
tongue sharp, knife embrace
slipped in while i look into your eyes
what are you made of
the cruelty of other lovers

dripping from your hands
the ones you put around my throat
gently you say, let me be inside you
long enough to default back to panic
where there is light
what are you made of

when i fall, i fall for human touch

Posted by Solid Quarter at 7:09 AM No comments: