What happens once you are free? 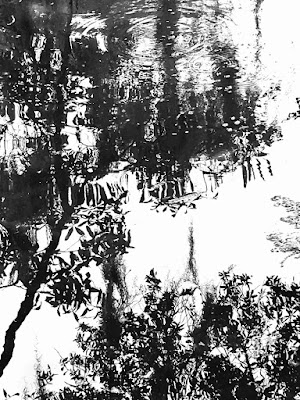 disasters takes years to recover from/ that is the nature of their imprint/ you can’t cling to life/ it’s already lost/ all of this, already lost/ look there in the pooling/ once this time moves/ we move forever/ all of this passes/ there is no guarantee of life/ our practices reflect us more than god

there is a chaos if i so choose
-A. Notley

"Incidents of abuse are never stand alone events."
-The Body Keeps the Score

What deaths are we ready to allow into our lives now?

Post-Katrina New Orleans in 2006 was a dangerous landscape. There were very few mental health resources, people were using to cope, domestic abuse went up, suicides went up. We sat stranded from each other. A city made of blocks of debris, abandoned homes, darkness for miles, and the emptiness where once we danced.

In Mardi Gras of 2019, we followed St. Anne over the tracks to the river where traditionally New Orleanians deposit their dead. Have you walked these paths? Have you danced to music in the morning as the sun rises over the costumed medley and as you passed the tracks made a wish:

I have walked at night on the eve of the New Year in a snake like pattern over bridges to clear this waking.

I have walked at dawn from the levee to the place where we pushed through the energy that bounds us to the past.

We have made such a metamorphosis of this living.

And now we ask again, can you sing us through this time of capsizing. Can you listen to this drowning and still tell me we will make it right. Right there, the shore in sight.

I will tell you to reach a place: You must never take your eyes from where you're destined.


"if you have walked outside the machine
Who are you?"

City Park, a 1,300-acre (5.3 km2) public park in New Orleans, Louisiana, is the 87th largest and 20th-most-visited urban public park in the United States. City Park is approximately 50% larger than Central Park in New York City, the municipal park recognized by Americans nationwide as the archetypal urban greenspace. Although it is an urban park whose land is owned by the City of New Orleans, it is administered by the City Park Improvement Association, an arm of state government, not by the New Orleans Parks and Parkways Department. City Park is unusual in that it is a largely self-supporting public park, with most of its annual budget derived from self-generated revenue through user fees and donations. In the wake of the enormous damage inflicted upon the park due to Hurricane Katrina, the Louisiana Department of Culture, Recreation and Tourism began to partially subsidize the park's operations.

City Park holds the world's largest collection of mature live oak trees, some older than 600 years in age. The park was founded in 1854, making it the 48th oldest park in the country,[ and established as the "City Park" in 1891.
Source: Wikipedia 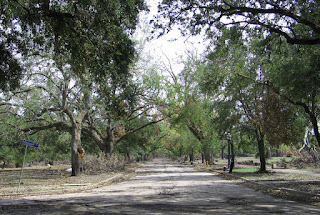 i feel like if i could just be still or quiet enough, i could hear something. is there something beyond expectation. that nails us to suffering. endeavoring to get it "right" when everything is already right- right before us.

he says, i make things harder than they need to be. and it's true. i needed you to speak to me in a language exact. a code i could read that i only wanted to read as safe. inside the complexity of chaos, the simple pattern of return to where we begin and to begin again. over and over. we pass through the chambers and all of the chambers are the same. it seems some days. we aren't getting anywhere. and then we arrive. and you'll know because if you are lost in your life.

it means you never made it this far before.

On August 29, 2005, Hurricane Katrina, the most violent storm in the history of the United States, ravages New Orleans. The city’s entire population is displaced.
In the land of opportunity, the disaster seems to provide an opportunity for a city’s rebirth on a fairer basis. But against all expectations and despite the Obama presidency, the Crescent City turns into a ground zero for imposing economic shock therapy, intensifying drastically the economic, social and racial inequalities that existed before.
Portrait of the city that became the US laboratory and reveals the divisions of a whole country.
https://vimeo.com/188628485
Posted by Solid Quarter at 3:55 AM