What believes in the dream of the body? 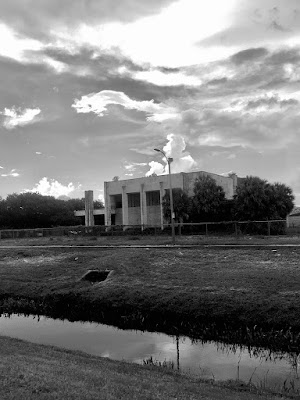 There were a number of hours between landfall and news of the levees breaking where most of New Orleans sighed into the belief of having weathered the storm: What do you call false time.  What is the language of suspension we travelled among in conversation as we moved from relief to terror into the dark nights of surreal undone, to say erased of all that we knew is the minute. To say you can never go home again is so much more than a series of words strung together.

At 10:00 AM EDT, officials in St. Charles Parish, Louisiana, St. Tammany Parish, and Plaquemines Parish ordered a mandatory evacuation of all of their residents. Jefferson Parish and St. Bernard Parish ordered voluntary evacuations, recommending that all residents evacuate, particularly those living in lower areas. Jefferson Parish officials did declare a mandatory evacuation for the coastal areas of Grand Isle, Crown Point, Lafitte, and Barataria. Tolls were suspended on the Lake Pontchartrain Causeway as well as the Crescent City Connection, to speed up the evacuation process.

At 5:00 PM EDT, New Orleans Mayor Ray Nagin announced a state of emergency and a called for a voluntary evacuation. He added that he would stick with the state's evacuation plan and not order a mandatory evacuation until 30 hours before the expected landfall. This would allow those residents in low-lying surrounding parishes to leave first and avoid gridlocked escape routes. However, he did recommend that residents of low-lying areas of the city, such as Algiers and the 9th Ward, get a head start. Nagin said the city would open the Superdome as a shelter of last resort for evacuees with special needs. He advised anyone planning to stay there to bring their own food, drinks and other comforts such as folding chairs. "No weapons, no large items, and bring small quantities of food for three or four days, to be safe," he said. The Louisiana National Guard had delivered three truckloads of water and seven truckloads of MRE's to the Superdome, enough to supply 15,000 people for three days.


Map of Louisiana parishes eligible for assistance.
Governor Blanco sends a letter to President George W. Bush asking him to declare a major disaster for the State of Louisiana, in order to release federal financial assistance.

In response to Governor Blanco's request, President Bush declared a federal state of emergency in Louisiana under the authority of the Stafford Act, which provided a, "means of assistance by the Federal Government to State and local governments in carrying out their responsibilities to alleviate the suffering and damage which result from such disasters,..."

The emergency declaration provided for federal assistance and funding, as well as assigned, by law, the responsibility for coordinating relief efforts with those government bodies and relief agencies which agree to operate under his advice or direction, to the FEMA federal coordinating officer (FCO). It also provided for military assets and personnel to be deployed in relief and support operations, although the Posse Comitatus Act imposes strict limitations on the use of Active Duty soldiers in law enforcement. 1701 Army National Guard and 932 Air National Guard are deployed (2633 total).

what's the dream design to a bridging

can you echo in a no chamber vat
of collusion

When we were kids, we played in the canal outlets, under the bridge overpasses along Morrison Rd. We rode our bikes unsupervised around neighborhoods, no cell phones. No social media. You could lay under the bridges to cool off and find odd stuff, discarded. You could peek over the railing and sometimes, we would pretend to be dead laying on the side of the bridge to see if anyone stopped.

Maybe we weren't good at playing dead because we didn't really know much of death.

"A human being is part of a whole, called by us 'universe,' a part limited in time and space."
-Einstein

The only commitment you can really honor in this life is to yourself. Love happens in the freedom to let others be all they are, without judgment, expectation or attachment.

Making a commitment to another is really an illusion.

The dissociative aspects of our culture are revealing an inability to deal with reality. And its deepest root lies in an inability to face death, suffering and mortality: Our aversion as toxic as our attachments.

Posted by Solid Quarter at 3:56 AM