Ok, the kids are gone until Wednesday and Dave and I are awash in adult activities... and by that I mean sleeping in, having coffee, taking books off the shelf and talking about them without being interrupted or having a crisis or a diaper to deal with. It's strange the amount of space in the room...suddenly, as my friend Tracey likes to say.
Dave and I are both reading Jonathan Cott but for completely different reasons. And this happens, as Jonathan Cott is a writer of any and many various things. I first read Cott's The Search for Omm Sety after I returned from Egypt in 2000. It's a very strange tale of a woman and her relationship to an ancient pharaoh, their love rekindled through her use of astral projection. It sounds ridiculous but Cott uses his skill as an investigative journalist to present a plausible and unbiased account of this woman's belief. I followed that with Isis and Osiris, an examination of the ancient myth and how it has trickled down into our contemporary culture.

Then I read Wandering Ghost, one of the best biographies of Lafcadio Hearn ever written. I'll quote Dave Brinks in his essay from Art Voices: Vivant Dans La Ville Fatale (Summer 09) "It's a wildly engrossing tome about a half-blind, Greek-Irish, eccentric vagabond journeying across 19th century Earth from bohemian New Orleans to New York to the Caribbean, and then later to Japan." Brinks goes on in the essay to excerpt selections from Cott's book to illustrate Hearn's time in New Orleans and how this influenced his Hearn's writing and thinking.

Beyond the Looking Glass is one of my favorites as I adore fairy tales. It's a compendium of novels, stories and poems from the Victorian Era with delightful images and pictures to accompany the stories.

Dave is currently reading Thirteen, looking into his upcoming poetry book on complex mathematical theories that I hear about on a daily basis but really don't understand.

I've been reading the complete Dylan interviews edited by Cott for my own work on a long poem about Wuthering Heights in conversation with Dylan lyrics; a topic which confounds Dave as much as his hexagrams confuse me. Coincidentally, Dylan refers to his music as mathematical.

Jonathan Cott is probably best know for his Rolling Stone interviews with Dylan and John Lennon. But he is also a poet; his book of poems City of Earthly Love (Stonehill Publishing, 1975) is filled with beautiful lyrics such as "He Dreams What is Going on Inside His Head." This poem opens with the line: "Angel Hair sleeps with a boy in my head," which Anne Waldman and Lewis Warsh named their magazine and press after; The Angel Hair Anthology (Granary Books, 2001) has Cott's poem in the opening.

Here's a poem from the collection:

I write you in small print

Waking up in little moments

Slipping through the intervals

As deck chairs turn in themselves

A wind blowing through

As a sun fan lifts

Rolling in dark grass to your hand

There's an interesting article at Slate about Cott's experience with ECT and his memory loss. It's a subject he explores in his book On the Sea of Memory: A Journey from Forgetting to Remembering.

Dave and I are checking into a hotel later for some more childless adventures, and this means that we have to pack our books.

Justifying the Margins by Pierre Joris

Transgender and Grinder by J. Semilian

Keep in mind we are going to be there a whole 24 hours, so we have to be prepared.

Posted by Solid Quarter at 7:02 AM No comments:

I've spent most of my life not winning things, so I'm absolutely stunned to have won this fantastic handmade gift basket from New Orleans Craft Mafia. I thought I would take a minute to pay homage to its greatness while I draw attention to how completely uncrafty I am. Macaroni Kid New Orleans held this contest; they have one of the most complete newsletters of family events in the New Orleans area. And they hold great giveaways each week.

So, I was sitting in my front yard this afternoon with the kids opening my mail only to find our ridiculously high (thanks, Katrina residual) home insurance bill when this lovely lady, (thanks, Mallory) came to my fence with a bag of crafts. I'm glad I didn't scare her off with my sad, angry, post bill viewing face. Here are a few goodies:


Three Bars of Soap from Sweet Olive Soap Works (http://www.sweetolivesoapworks.etsy.com/) They have fun New Orleans names and the Carnival Time one has hints of gold, green, and purple. I opened C'est Levee (Lemon Grass and Aloe Vera) and it has a fleur de lis imprint on it. The soap smells wonderful without being overbearing. They are made with a combnation of oils such as olive, soybean, almond, coconut, which is perfect for me as I use coconut oil as a lotion practically.

Here's a fun New Orleans inspired keychain from Green Kangaroo, an Abita Beer Top with a Mardi Gras baby. Two items that would usually end up in the garbage put to good use at http://www.greenkangaroo.com/. 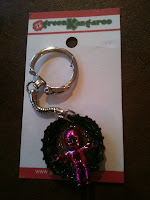 This Saints colored fleur de lis pin is from Kristina Renee Jewelry (NOLAjewelry.net). I'll be wearing that on Sunday!

Here's a fun craft idea: a rocket ship clock made from an old 45 record, Disney album from Snow White. This is really fun. I think it'll decorate the playroom. Made by Art by Mags (artbymags.com) 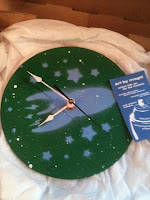 My kids are already using the nightlight below in their room as they broke their old one about a month ago. It's really well made and my four year old approves.

This is a beautiful and well made hand bag from Bayou Salvage, comes in its own stamped case to protect it and zips down the side with a wrist strap. Bayou Salvage (bayousalvage.com) says they make rustic and romantic designs from down south, Handmade with care in the city that care forgot. 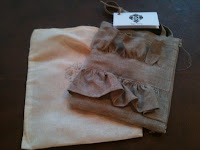 Two necklaces, one with a classic antique feel and one with a contemporary abstract look.

Some fun rainbow earring and oversized ring from Shop Miss Malaprop (shopmissmalaprop.com) Unique handmade and eco friendly gifts. The earrings remind me of my Rainbow Brite obsession circa 1987. 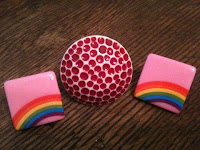 I absolutely adore this ceramic wall hanging. The picture doesn't really capture the detail. This is from Lucky NOLA by artist Reagan Robinson (http://www.lukcynola.com/)

Here's a link to the New Orleans Craft Mafia Blog where you can see some of the artists above highlighted and get an even better selection of their work. You can access all the artists' etsy stores from this site.

Miss Malaprop has a terrific blog here if your interested in crafting and reusing: http://www.missmalaprop.com/

Our features will be followed by Open Mic hosted by Jimmy Ross.

JULIAN and LAURA SEMILIAN
Julian Semilian is a Romanian Poet, Film maker, novelist, and accomplished translator. His writings have appeared in journals and anthologies around the world. Recent translations include: Nostalgia by Mircea Cartarescu, Paul Celan's Romanian Poems, and many translations within the comprehensive: Born in Utopia, Anthology of Romanian Literature. With his wife Laura Semilian they have translated Max Bleecher's Scarred Hearts, Gherasim Luca's Inventor of Love (Black Widow Press 2009), Micea Cartarescu's Levant, and works by Gellu Naum. In addition, Laura Semilian has performed opera and oratorio roles with numerous orchestras. They both reside in North Carolina.

Posted by Solid Quarter at 12:11 PM No comments:

For more info about Trembling Pillow Press: tremblingpillowpress.com
Posted by Solid Quarter at 4:47 PM No comments: