My review of Kate Eichhorn's Fieldnotes, a forensic is in the new issue of Rain Taxi (Fall 2011).

I've been ecstatic about receiving in packages of two or three a day a collection of Dusie Kollective Chaps. The author's have been so generous, and I love their notes as much as I do their willingness to share their chapbooks with me. I'm having to collect all the notes, chaps and envelopes together, so I can keep them as I discovered them from the mailbox.

Black Widow press has just released Niyi Osundare's City Without People, and I have been reading and rereading it for an upcoming review in October's issue of Entrepôt.

We also had a wonderful reading by Louisiana Poet Laureate Julie Kane last night at 17 Poets! She read a beautiful crown of sonnets (sonnet corona) for artist and coffee shop owner Bob Borsodi. He was quite a remarkable person, and Nathaniel Turner has a wonderful collection of tributes to him here. 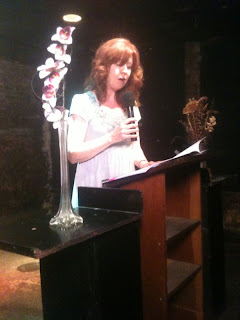 Posted by Solid Quarter at 3:09 PM No comments:

AMAZING HISTORI-CITIES...New Orleans e-ART-h Community News
EXTRA! EXTRA!...A LOOK BACK!
Read all about it further below under DIDYA KNOW?
* * *
Dear Friends,
As Louis Armstrong says, "Everything I've ever done is dedicated to the cause of HAPPINESS!"
And so we tip our hats to you, and to the fine spirit of Louis' credo, and thank you dearly for your vibrant support in celebrating New Orleans culture!
Please join hands with us at 17 Poets! Literary & Performance Series. Be a part of our first ever fundraiser! You can help us continue to provide FREE world class POETRY EVENTS in the New Orleans community; go here:http://www.indiegogo.com/17-Poets-Literary-and-Performance-Series
We have succesfully raised $295; however, this is well short of our goal.
We only have (7) DAYS LEFT to the conclusion of this fundraising campaign.
DIDYA KNOW?
The host venue for 17 Poets! Literary & Performance Series, the Gold Mine Saloon, is an essential part of the French Quarter's cultural tradition of Poetry & Jazz reaching back over FIFTY YEARS. In an earlier period, at the very same location (705 Dauphine Street), the establishment was called The Tunnel Bar. One of the more memorable JAZZ POETRY sessions took place at 3:00pm, Sunday, December 21, 1958. The event was produced and hosted by New Orleans' cultural visionary and poet BOB "Rainey" CASS featuring performances by poets JACK MICHELINE, celebrating his first book of poetry (RIVER OF RED WINE, Troubadour Press 1958), and RAINEY CASS accompanied by the ALEX "DUKE" BURRELL TRIO. Admission for that show was $1!


John Sinclair's SONG OF PRAISE   Homage to John Coltrane
Available now for digital download from CDBaby, but the album or download songs.

John also has a new book by the same name from Trembling Pillow press, available through SPD books or Amazon or visit: www.tremblingpillowpress.com


Flying in from Amsterdam, John Sinclair will be here this weekend. He has a bevy of appearances over the next two weeks, including this one on Saturday.

http://www.cdbaby.com/cd/johnsinclairandthebluess2
Posted by Solid Quarter at 12:21 PM No comments: 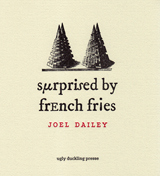 I'm spending Tropical Storm Lee's constant and yet not consistent rain storms deep in contemplation about a little chapbook called Surprised by French Fries. The next issue of Entrepôt will have a review of this chapbook. You can get your copy here:
Ugly Duckling Presse

Entrepôt is now available at Crescent City Books if you're in New Orleans and we'll have a subscription link up soon over at Trembling Pillow Press.

Thanks, TS Lee, it took me three days to write and post this.

In other news, Michael Tod Edgerton is over at the Truck blog asking some serious questions for a really interesting project: http://halvard-johnson.blogspot.com/
Posted by Solid Quarter at 4:34 PM No comments:

VisitIssue one of Solid Quarter (Summer, 2006) published by Trembling Pillow press in New Orleans, edited by Megan Burns is now available as a free download:
http://issuu.com/tremblingpillowpress/docs/solidquarter1 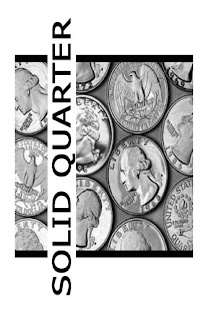 Visit Trembling Pillow Press for information on current issues and submission information.
Posted by Solid Quarter at 1:30 PM No comments: 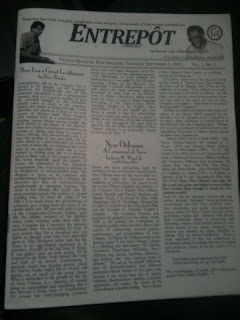 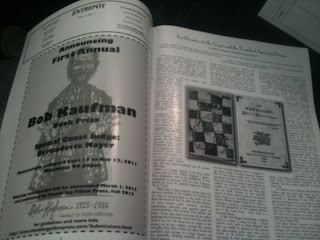 Entrepôt is New Orleans' newest literary monthly featuring contributing articles from Dr. Jerry Ward, Jr., Bill Lavender, John Sinclair, and Dennis Formento as well as contributions from Publisher Dave Brinks, book reviews by Megan Burns and edited under the helm of Editor-In-Chief Geoff Munsterman. Articles discuss New Orleans history in poetry and publishing including a look at journals such as Climax, Les Cenelles, and publications from Loujon Press, such as their Outsider journal. John Sinclair examines the history of music in New Orleans looking at early jazz contributors including Buddy Bolden and Edward 'Kid' Ory.

More information on Entrepôt including ordering information and submissions of article ideas can be found at the Trembling Pillow press website: www.tremblingpillowpress.com
Posted by Solid Quarter at 4:06 PM No comments: 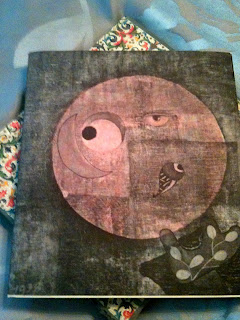 
---Some of the NEW ORLEANS RELATED PUBLICATIONS featured in this EXHIBIT will include:
NOLA (1840's)
CREOLE VOICES ed. by Edward Maceo Coleman, 1945; A Centennial Edition celebrating LES CENELLES, the first African-American anthology of poetry published in New Orleans in 1845, ed. by Armand Lanusse.
NOLA (1850's)