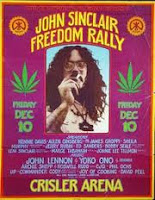 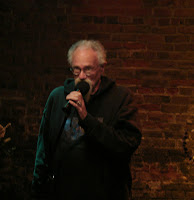 Trembling Pillow Press is set to release the newest collection from John Sinclair, hailed by his contemporaries as the "hardest working poet in show business." His new collection SONG OF PRAISE: Homage to John Coltrane is a collection of poems as well as reviews of albums and concerts all written in response to the force that was John Coltrane and his musicians opening up the field of jazz in a way that mirrored the opening up and expansion of cultural norms and views throughout the sixties. Sinclair was there in the audience and he captured all of those moments in this work in order to continue doing what he does best, which is to be the container for the histories and the stories behind the music.
If you're not familiar with John Sinclair, shame on you. Remedy that immediately. But even if you think you know him or his works, there is a lot to this living legend. I won't try to pin down all his works, but I can lead you to places where you can educate yourself, as they say. A full listing of his collected writings and recordings can be found in the back of his newest collection, SONG OF PRAISE: Homage to John Coltrane due out in September from Trembling Pillow Press (www.tremblingpillowpress.com).
You can start by checking out John's site: http://johnsinclair.us/ 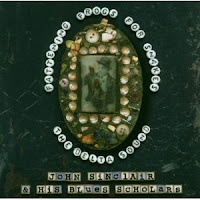 Here's a great collection: Fattening Frogs for Snakes: Delta Sound Suite (Surregional Press, 2002) 15.00
Nearly 200 page of John doing what he does best: capturing the legends of blues and rehashing the myths, the stories, the inspiration, and he does it all with his sincere amazement and joy at being allowed ears to hear such wonders
The back of this book contains a great cross reference sections for the reader who wants to explore further as well as a discography if you would prefer to listen further. It also contains a fantastic intro. by Amiri Baraka, who proclaims how rare and necessary John is, "Especially, if you know that many people think JS is, no shit, WHYTE!"
It's All Good: A John Sinclair Reader (HeadPress, 2008) 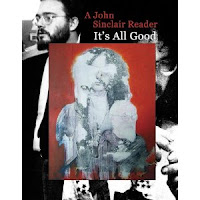 This is a great collection of John's poetry as well as essays, as he states in the beginning of the book: "forty-four years as an American poet and journalist." It includes, for example, John interviewing Irma Thomas, Dr. John as well as a discussion about the Mardi Gras Indians. His New Orleans roots shine through in this collection as brightly as his poems on Monk and Coltrane. As with many Sinclair collections, there is CD that accompanies this text, so you can hear Sinclair in all his passion tell you how the blues was born.
Guitar Army: Street Writings/ Prison Writings
Originally published in 1972, this collection features John's early writing for the Ann Arbor Argus and Detroit Sun among others as well as writings he did while imprisoned on his "ten year for two joints" charge including transcripts from the trial, letters to his wife and an interview he gave while imprisoned. This is a brightly colored array of manifestos, protests, and revolutionary writings as well as intimate insights into Sinclair's thinking as he sits behind bars thinking about freedom and activism. It ends with a reading and listening list. It's an incredible snapshot of this period.
Also, check out John Sinclair's Documentary:

Posted by Solid Quarter at 5:26 PM No comments:

Dancing Girl Press is having a chapbook sale: Get 5 books for 25.00.

I jumped on it last night and they have a generous title list. I snagged:
Claire Hero's Cabinet,
danielle vogel's lit, (cover pictured here)
Emma Bolden's The Sad Epistle,
Sarah Gardner's The Calculus of Owls and
Julia Cohen's The History of a Lake.
There are another 5 I want to go back and get as well. Kristy Bowen who edits Dancing Girl Press has this beautiful gift for the visual, both her website and her blog are so visually appealing. I love to look at the images that catch her eye and check in to see what new projects she is in the midst of making.
Support DGP for their many years of putting out great chapbooks with this great sale.
http://www.dancinggirlpress.com/
Posted by Solid Quarter at 5:55 AM No comments:

We've just returned from the annual Tsatsawassa Poetry Reading at Bernadette Mayer and Phil Good's house. It was a smashing success, and we brought our 18 month old Issa. And while US Airways tried to put a damper on all things lovely by rerouting us for a third layover in Charlotte (U Suck US Airways!) we did make it back to New Orleans in one piece. And later, around midnight our bag full of poetry books made it home via courier service.
Some people who called in to read at the Annual Poetry Reading:
Ed Sanders from Woodstock
Andrei Codrescu from the Ozarks
Nicole Peyrafitte and Pierre Joris from France
Rodger Kamenetz from New Orleans
And live in person, hosted by Poet Dave Brinks:
Poets included Bernadette Mayer, Phil Good, Brenda Coultas, Phil Johnson, Megan Burns, Brendan Lorber, Tracey McTague, Peter Gizzi, Tom Gizzi, Dara Wier, Shafer Hall, Paulette Swatzfager, Susan Deer Cloud, Geronimo, John Roche, Michael Ruby, Deborah Poe and others who I either can't remember at the moment or I missed as I chased Issa around the house and through the yard. My apologies if you are not here, just comment and correct me. It was fabulous, and I will upload pictures once I transfer them from one device to the other.
In addition to Poetry, Bernadette took Dave and I to see the Cohoes falls. We also ate at a fancy Italian Restaurant called Gregory's House or La Perla. And the weather was much more friendly than the 100+ degrees that we returned to in New Orleans.
Posted by Solid Quarter at 2:24 PM No comments: