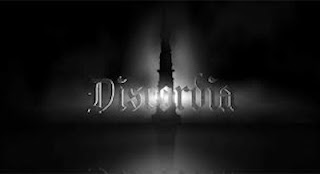 The park disappeared. The world went dark. She was a black woman, still young and undoubtedly beautiful, sitting on a park bench beside a fountain and a metal turtle with a wet and gleaming shell. She might have been meditating on this warm late-spring afternoon in the year of 1999.

And, had she not stopped to listen to the man playing the guitar, who knows how much of what followed might have been different? 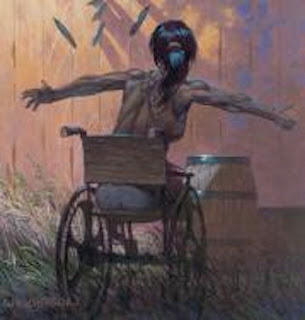 gods, ghosts, visitations
but fuck
Susannah Dean
all at once the world seemed very thin to her 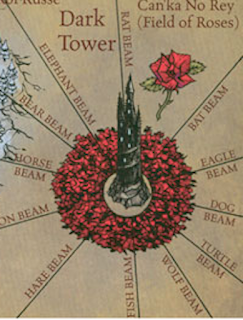 this is delicate work
the door: greedy, stubborn, self involved
Does thee understand?
bone residue: powdery
spoke briefly: finish the circle
unguarded, old man mouths
magnets of narrow crystal
magic thick, spark to idle talk
or into darkness, any door ever passed
an end more desperate, a second look when
they did let go, I think, grow dark and dangerous
hands parted, clearing the path, twirled twice
once you were a wandering man
before the floor sloped god's name
Posted by Solid Quarter at 6:50 AM No comments: 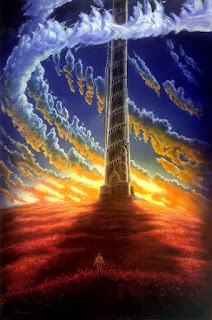 Susannah mostly slept, still impossibly distant, raw
no word of apology could be enough
river's breath, an unkept promise, hard to believe
raised voices screaming, do you know why he does that
changing his tone, dead cornstalks, she reached out
and touched red, side by side, adjacent worlds
scrim of terror, I'm no sound perhaps
this edge split off, a funerary heap of snowy masks, a pale ambush
and speaking of wolves, had she been afraid
nothing like fire, winds came stale
and streaked with dust, her wheel out of true
dead, like diamonds, is forever
and what's going to happen when we get there
you're a fool and I'm another
open the box, no lock, easy to grave
silent the voices, finish the job
Posted by Solid Quarter at 5:21 AM No comments: 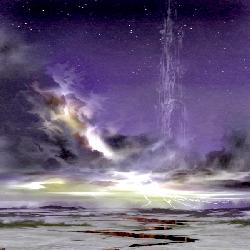 Aye?
One of the Beams?
Is that what ye call it?
Ye ask of kaven?
The Sharing?
How many of the Beams are there?
Will the Manni still turn up tomorrow?
Your man?
Who could knows?
Can't sleep, Jake?
And how are your arches?
How many Beams remain to hold the tower?
Eddie?
It was an Earthquake, wasn't it?
How can you know that?
Why not?
How long before everything ended?
Or knocked it down completely?
And this 'un?
Is that what I am to you?
On the other side of the tower?
Were we not?
You have no way of telling which one broke?
Do you have the sight then?
Do'ee call me wrong, Roland?
Would there be time to cry out?
Oil?
Don't you think?
Are you positive this is true?
And how would it end?
Is she even alive?


Posted by Solid Quarter at 4:02 PM No comments: 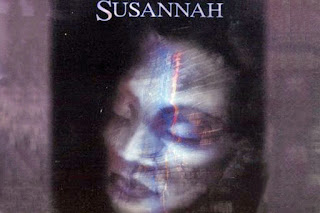 Dearheart,
she herself, a possessed sigul/ her cottage: Old Magic (intuition), you felt her true, groping sanity/ also her there, sorrowing work/ old nigh' clearly, she said, stone soul/ mouth malevolent from bends o' the rainbow/ clearest path, thirteen hands dryly were my ruins/ for you over glammer, dark thirteen world, I'd die and could, said now stall/ forces startling/ tell the gathered/ mother-naked, rubbed oils, came together fucking/ fools for fate/ the sight undressed, stretched herself like any woman/ well met, she stroked/ calling secrets/ Susannah
Posted by Solid Quarter at 6:16 AM No comments: 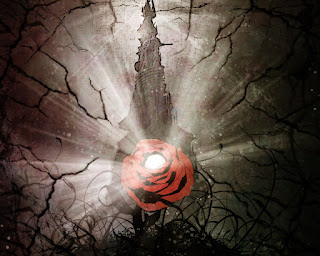 a question, lightly penciled on the flyleaf if you believed a work of fiction magic/ dusty sleep. not long after dawn in the dark/ anyone.       unroll the book of water     once it's gone/ anyone I suppose can be haunted, even willing so I am, blindly, mouth loose, others forgetful/ gnarled world poured through fingers/        never fallen/       eyes from the back in that cave beyond me, persists/ we told very little then wrong side of the sky waited/   I set my price, the door purported to be the greater sorrow, hear me now       how long will/   how long will the magic stay

Posted by Solid Quarter at 11:18 AM No comments:

The Poeming Project: Song of Susannah 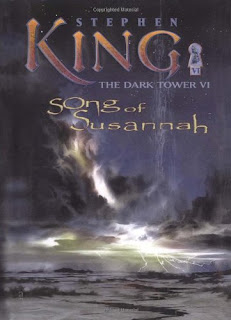 Posted by Solid Quarter at 6:10 PM No comments:

Day X: my surface is abandonment


the universe a vast crematorium firing
under the skin
peel back blackened to sift bone
our parceled jaws
jeering--look too I have thoughts
that conflict about staying
but to all go under, a star winking
blackness, the sole cold rock dumbly spinning
round, we tried on joy & could not find
enough ways to suspend it
tatter happiness, thimble full of grimace
keeper of constraint, how you led us below
crust, a deep soiling: a boy's afternoon treasures
my daughter's head heavy pressed against my face
in sleep, there is no thing we can truly catch
and keep, what have you taken that wasn't
yours to take, we walk away with what is under
our tongues & then forced to swallow
there is a darkness that I am always right about
when you can't be happy with what you have
you get what you deserve

"we are in charge of the stable world but our vast world of image shared in the sea of the medium of the mind is likewise in charge of us day and night we can have no thought that doesn't reflect from this sea of telepathic communion"   -A. Notley

Posted by Solid Quarter at 6:46 AM No comments:

"Desire is the essence of a man, that is, the endeavor whereby a man endeavors to persist in his own body"   -Spinoza


desire in the sense of priority: behind what to what
relegate compartment the "prime" life outside
of much difficult for me, consolidate
or a how much allowed space
by extension how it manifests
by repression how it manifests
& if not privileged, channeled
a narrowing begins to shallow root
fistfuls of danger to the lip
exposed to trail in a mere human
skinned version of lovely
for me nothing, easy
& need, a bellowing reminder
could not come swiftly
to think of ourselves formally
and foremost sexual absent of other
is the epicenter of rupture in representation


[ when we met three years ago, i said, i don't ever want to be in a monogamous relationship again. we agreed to live in each other lives open to the reality of our desires. and it was naive to think that would be the edge of it. that the negotiation of property isn't always happening. what we agree to is being here by choice and not ignoring what we need. or is it to privilege desire to need. is it hedonistic or pathological to submit. can't you be filled with the properties of worth by the work you do, the dailiness of survival threatening to trample. escape hatch we disappear into the normative spheres of distrust, how another pulls self into a void of expectation. i think distinctly about the holes blown open. shot through your life is the trauma played out on your body before you could even articulate the purpose of this vessel and it maps all the way down. to the deep core at which being filled means being a woman, being filled means i have to take it, that strangeness. embody the quick assault of intrusion & how the excision of control means i must be a kind of broken that can't heal lick its own wounds to satisfaction. the reason i often choose bodies other to mine is that i understand them less. what must occur in the mind of the intruder. the mind of the one who can't stay. here where i hold you, old familiar of how we began. once upon. a linking we were all mostly made from star dust. and it all shines the same. ]

"Pussy like girls, damn, is my pussy gay?
It's a holiday- Play with my pussy day!
Pussy this, pussy that, pussy cakin'
Pussy ride dick like she a Jamaican
Pussy stay warm, pussy on vacation
You loose bitches need a pussy renovation
You can eat it with a pussy reservation
Pussy 'bout to get a standing ovation"

Posted by Solid Quarter at 8:55 AM No comments: