Review of Vincent Cellucci's An Easy Place/ To Die 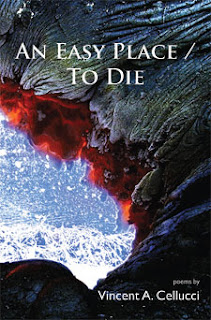 An Easy Place/ To Die by Vincent Cellucci
CityLit Press (2011)

The oldest stories are flood stories. Here in Vincent Cellucci’s An Easy Place/ To Die, the flood that swept through New Orleans in 2005 haunts the text, shading and contouring the line of thoughts and memories contained in this carefully constructed book of poems. Carefully constructed in its specific layout, Cellucci wants the reader to know that the story of this flood reads like a palimpsest covering the oldest of written tales, Gilgamesh, and borrowing and leaning on influential texts such as Eliot’s “The Waste Land” or Joyce’s Ulysses. These markers are not integral to the understanding of the poems though as they create their own particular landscape; it simply allows us to appreciate the layered history that Cellucci is writing upon. Bleeding through the lines is the structure and forms that Cellucci insists must make sense of the chaos, must in some ways contain the terrible. Cellucci claims that New Orleans is his Enkidu, the city made flesh and in this incarnate form: the one sought. It is down into the underworld that one must always travel to understand. Cellucci may title the book with the directive “To Die” but this is a collection about thwarting death, about emerging into the light after a long trek in the darkest dark.

The first section begins “Uruk—Cradlecasket,” establishing links from the oldest of cities to this present day city: New Orleans. Embedded in the word “Uruk” is the “Ur-” that signals a primal or precursor to whatever follows as in the “ur-poem” with its promise of the germane source of our modern texts. “Uruk” draws an interesting parallel to New Orleans in that it is an ancient city whose history is built on myth and fact. In some sense, New Orleans remains a city existing somewhere between its own myths and reality, and it’s not a far stretch to imagine its eventual disappearance and subsequent memory being one constructed on these guiding principles. The district of Eanna in Uruk is one of the earliest known cites to develop writing and architecture cementing its place as a true “ur-city.” But Cellucci knows as well as any New Orleanian that a city is an illusion and what makes it stand is as illusory as a line of descriptions pilling up to embody the scene:
“megalomaniacs line to Tip’s/ for vampire music/ & blood/ suck mosquitoes/ a domicile/ turned    sacristy/ febreezed/ smellnomurder/ comingoutfromin/ that’s welfare” (16). Unpacking all of these images reveals the interlocking nature of urban life, the music integral to New Orleans is paired with the murders and poverty also widespread in the city.  The mythology of Anne Rice’s vampire lovers paired with the reality of blood sucking insects, and in the lines, words crammed tight to signal our need to either rush past, (don’t look here where the murder lies) but that also mimic the rhythmic rush of speech.
The vernacular emerges throughout the poems capturing the speak of every day in lines like “done made a habit out of where you live” from “Eyes Bottle You” or in “Cleaning up/ Al’s Apartment:” “we walking graveyards. inside, we all hold the dead. clean them alive.” The second section: “Ishtar Castles” present poems dedicated goddess-like to the invisible other who in turn fascinates and torments the speaker.  Cellucci employs the use of the term “nother” to further depersonalize the “other” who is the source of the emotion, but the intimacy is emitted via the intense scrutiny of the other, sometimes fierce and sometimes tender: “the world lies/  lie with me/ invent constellations/ between our imperfections” (35) can be thrown against the earlier “I want to conquer you   speaking/ of which     start pretending/ you haven’t    smothered me” (25).  Cellucci often marks line breaks in the titles of his poem as he does in the book’s title; a structure that should read as a marker for us is purposefully broken. A stop of breath is commanded by the interruption, and yet the line remains whole: broken and whole.

Some of the most beautiful lyrics are contained in the third section “Death by Heaven’s Bull” such as in the poem “Partial:” “we enjoy the brackish taste/ of tears toppled// we take the slow boat/ to scales/ we devour” (39).  Again, in “White Azaleas/ or Axioms for my Daughter” the delicate wisdoms of: “Don’t you don’t/ Could wind be a wish on us? / Let’s leave to a song./ Use imagination, not others.” The final poem in the collection “Causeway” is a long tribute to a post-Katrina New Orleans and, like the world’s longest bridge that it is named after, it carries us on a journey from one place to another. But here, it is the bridging that matters, (coincidently, in the afterward, Cellucci notes that the poem is loosely based on Crane’s famous bridge poem). “Causeway” attempts to contain the chaos of emotions amid the surreal and heart-wrenching imagery, sounds, and smells that were post-K New Orleans. “how I love Americans/ who (haven’t) waited/ on the corner to grab canned water and MREs” it states, playing with the literal opposites between New Orleans and everywhere else. Conversations overheard drift in on absurdist wings: “ ‘Baby, I don’t have any clothes’/ ‘It’s okay, I don’t have a stomach’”(62). In the afterward, Cellucci states that “Causeway” is a presence that “perseveres collapse and immolation,” (82). Perseveres, a word so close to the word preserve, which is another thing these poems do, but perseveres implies a resistance against, a lasting in spite of. And that’s New Orleans, preserved and persevered, caught in the double bind of “being easy” and “dying.” It’s a beautiful mystery to contemplate, like an ancient tale handed down century by century, and yet, here it is among us for the taking. Cellucci’s voice embodies the complex lover/ warrior, dissident and disheartened, and yet coming up from under the rubble, as Milton would say: long is the way/ And hard that out of Hell leads up to light.
Posted by Solid Quarter at 2:52 PM