Review of Michael Ford's Where We Expect to See You Soon 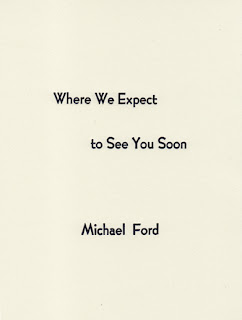 Where We Expect to See You Soon by Michael Ford
Ugly Duckling Presse, 2011

Often there is a text that haunts the text you’re reading. In the case, of Michael Ford’s Where We Expect to See You Soon, the reader is pointed in the direction of one such haunting in the opening epigraphs. Alice Notley’s line: “we move back into a damaged city” both frames the context of these poems and also signals to the careful reader a subtext for this work in both rhythm and line. I say rhythm and line because I don’t think one can bring to mind Notley at the beginning of a poem sequence without being attuned to her attention to the way a poem moves both in its line and each line in its place in the world of the poem. The epigraph is the first line from a poem “City” from the unpublished collection “Benediction” in Grave of Light (Wesleyan, 2006). The word “city” in the line though immediately reminded me of another chapbook, entitled “City of” by Notley (Rain Taxi, 2005). The two are probably linked in more than language as I read Notley’s chapbook after returning to New Orleans in late 2005 with its prescient lines: “It’s a placid / earth of horror and / from it/ I begin//No nation now/ only a/ city.” Ford, also a New Orleans poet, touches on these same images in the opening poem “The New Atlantis” where we find, “The city was marked— in the atlas as lost—the map of the place.” So, here are two texts wrestling with the city, the loss of the city and the illusion of the city. Each text also is setting down lines with precise rhythmical markers that tell us how to read the line as though we were locating through sound some sense of locale in the breath. Ford’s technique is to use the dash to break up any continuity in the line and to cause the reader to stop short and then begin anew. The line breaks become not the breaks, or smaller breaks when confronted with the eye’s need to traverse the horizontal line separating the sentences. In a sense, the horizon line also holds the text together, stringing through the body of the poem like a life line thrown to the drowning person: Here, if you can follow the path of this, if you can hear the sound of my voice, they seem to signal. Ford’s line breaks as well though signal distress as repeatedly the word “city” is broken amid other words cut in two by the end of the line: “fenc/es, to/day, dig/nity, point/ing, meta/phor. o/ver.” Things are broken; the tempo of the line, if not for the break caused by the dashes, would hurl forward at a rapid pace, especially as the images of what the city is pile up. In the ways that memories of loved ones crowd forward, the city is displaced and in its stead a cacophony of oral and aural images surface to take its place.  The narrator guides us through the ruins: “We make our way by match light—conveyed—on/ light bones and feathers—wings fanned out.” And that’s just the first poem.

Ford tells us in a note at the back of the book that all of the poems are written in a form he calls “89,” where the syllable count in the lines as well as the lines in each stanza adhere to a loose structure based on 8 and 9. This brings us to the second epigraph from Shakespeare: “And in fresh numbers number all your graces.” This isn’t the first time that Ford has used a number constraint to create his poems. The success lies in the all but invisible deployment of the method. Far more obvious than the number form on the poems is Ford’s use of the dash to break up his lines and his use of space to cut the line cleanly and control his rhythm. Take the poem “Lizzie Borden, What’s all the Fuss About?” which begins with the line “This will be my murder ballad—” and then precedes to deliver a poem mimicing both Williams’ variable foot as well as subject matter, only to break off in the next line stating: “These fucking numbers are on every-/ thing.” In light of the author’s note, the double meaning behind such a line is even richer. More interesting to me is always Ford’s deft handling of the movement of the poem, here at once he is able to slow the line down to a crawl like William’s cat foot creeping about and then pick it back up to toss it around.  Ford also has the poet’s eye of taking a seemingly innocuous statement and placing it down amid a sea of chaos, so it suddenly resounds loudly. Take the line: “The river is deep because/ there is so much water in it.” Alone we might find this statement quaint, but in Ford’s hands this is the poem “10 Most Dangerous Places in Space” and we have been led here with this reminder: “We will never meet—in quiet/—in footprints on another globe—We/ will never meet again.” Another connection between Ford and Notley for me is that their poems often chill me to the core, and yet I can’t let go of them. Ford presents us with the familiar just enough out of place so that we can never get comfortable; his poems envelope the terror —root in the “terra incognita.”
Posted by Solid Quarter at 3:04 PM