If you've talked to me about poetry in the last month, it's quite possible that I have talked at length about my ongoing obsession with this video: "Stupid Hoe" by Nicki Minaj.

I didn't know who Nicki Minaj was until the Superbowl when she performed with Madonna and then I googled her and this video was the first one I watched. I watched it on a loop repeatedly for a few hours one day and thought, I'm gonna write a poem about this. Then that poem became a whole project based on the images, history, lyrics and anything contextual that the video and song bring up for me.

I aired what I call the panel screening of this Project at McKeown's bookstore on Friday, March 16th. Originally, the talk consisted of screening the video with me stopping and discussing the various points along the way in my poetic analysis of the "Stupid Hoe" video. The talk is called "Stupid Hoe (explicit)."  The store where I wanted to perform the piece does not have wi-fi, so I had to compromise and made a power point with the audio from the song.


Nicki Minaj: some tribe: this wicked talk back 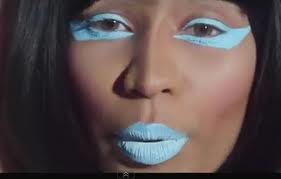 One of the items I talk about in the beginning of the video is Kate Durbin's project Gaga Stigmata, which is an incredible resource for being able to talk about media imagery and the rise of the "pop star" as well as the art that is being created in this context. I was drawn to a particular piece by a doctoral candidate in theological studies Peter Klein who discusses the use of religion in Lady Gaga's performances and persona. He states that she is both deadly serious and mocking in her rebuttals and insertion of religious phenomena and ritual in her performance and even outside the performance (if there is an outside that we view) in her persona. I'm not a Lady Gaga fan, so I can't really speak to the articles and all the things happening on Durbin's site, but I'm intrigued by it as a construct for thinking about language, theatrics, poetry and politics. I think the same idea of Klein's thesis applies to this project as inhabiting both a space for the absurd and the serious, a place of inquiry that can also laugh and poke fun at exactly what is being uncovered and deconstructed.

The political body of Nicki Minaj: To inhabit the persona 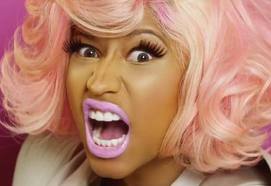 Some of the items I talk about in the screening range from Angelina's infamous leg to the Lil' Kim argument that spawned this video to Minaj's use of Barbie in her personas and Rush Limbaugh even makes an appearance thanks to his timely throwing around of the slur "slut."

What's most interesting to me is the way that Minaj's use of "Stupid Hoe" and the traditional framework that it falls in within the rap genre of elevating oneself and one's lyrics by basically calling
everyone else out, is how Minaj's absurdist approach can be contrasted and compared with
the far-reaching and almost ubiquitous male rap lyric that seems to revel in the degradation and vicious, disturbing name-calling that is hurled at women in so many rap songs. In fact, it's interesting to look at the label and rappers associated with Minaj's "rap group" as Lil' Wayne, for example, engages in particularly hostile remarks about women in his lyrics.

Not only do I recite a handful of really obscene, obnoxious  hate-filled lyrics in the talk but
I like to note how many time these videos have been viewed on youtube. I wonder about how we allow language in certain places (spaces) and yet reject it and come up in arms when that language emerges in  another venue where we have decided it is not allowed and how this relates to access and exclusion.

Youtube is this fascinating recorder of imagery to me. We can get some sort of idea of how many times images have been viewed as well as people's likes, dislikes, comments and my personal favorite, the youtube response video. There are a number of angry response videos to Minaj's "Stupid Hoe" as well as clever parodies, several videos showing you how to do her tribal make-up, a few poetic readings of her lyrics and then some people just filming themselves in front of their computers lip synching this song.

Wow, I love the internet. 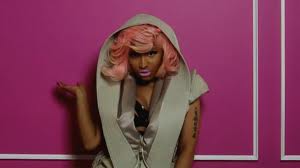 One of the reasons I'm so attracted to this video is the amount of thievery it employs. Part of this is a direct response to Lil' Kim's attack song on Minaj "Black Friday." Lil' Kim basically accuses Minaj of being a "clown clone" copying her looks and lyrics, etc. It's so bizarre that a genre of music that changed the idea of copyright based on sampling also contains this intense authority and ownership. I don't prescribe to it: I think everyone is a copy cat. I invite discussion to the contrary and encourage theft. 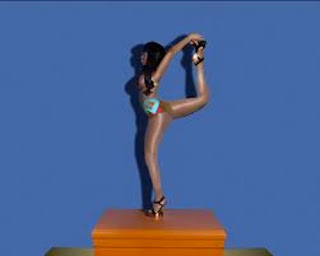 The power point project turned me towards really considering the stills from the video without the audio. Stan Brackhage tells and teaches us with his films that when audio is removed, our eyes begin to really see.

This in turn generated the next part of the project which consists of poems based on still images from the video.


To the left is one image from the beginning of the video: 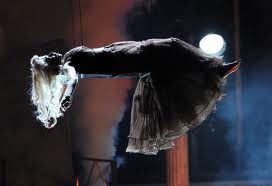 Oh wow, this is great! I'm a big fan of Nicki Minaj's work, and I think it's particularly intriguing to analyze this intersection of immense popularity and a poetic message, a truly rare thing for a female rapper. I think you're spot on with a lot of your points, especially when you talk about ownership in hip hop.