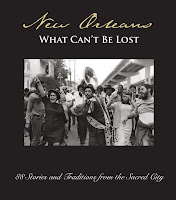 Book Synopsis
The eighty-eight stories and traditions in New Orleans: What Can't Be Lost are the piano keys in a love song to the city. Alongside Christopher Porché West's alluring black-and-white photographs, New Orleans' culture bearers pay tribute to the city they call home. From Storyville to the Super Bowl, from cover to cover are found Pulitzer Prize-winning writers--four of them gathered on these pages; Creole chefs; float and costume designers; a break-acrobat flipping forward over tourists lying on the pavement like matchsticks across from Jackson Square; Black Mardi Gras Indians; parade captains; musicians; protectors of the city's historic landmarks; writers of its poems and articles and novels and plays; and those who pass down traditions in the performance of New Orleans culture.

Here is a link to the index of contributors: http://ulpress.org/images/new_orleans/contents.pdf