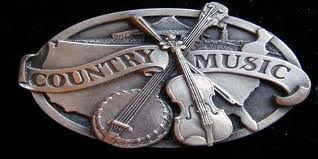 I'm fascinated by poet Kristin Sanders' obsession with country music. It speaks to my own obsession with rap music. Two different worlds/ sounds wrapped in the construction of how it makes us retell our own stories against the flow of another's words. I want to talk about her video and her poems over at TENDERLOIN this month.

Link to Sanders' video: I Learned to be a Woman from a Nineties Country Song

What's happening in this video? It seems like a tongue in cheek nod to how "country music" frames a type and that type is then performed by Kristin in an almost hysterical sense for our viewing pleasure. And I use "hysterical" with a precise nod to Invention of Hysteria, which I know Sanders is familiar with, and I use "pleasure" to denote as well the titillating view we are presented with as she romps and shakes before the camera.

The shot opens with our "performer" in the garbage can, a male voice off camera says, "do it" and then our "performer" pops out of the can to shake her stuff. It enacts a pornographic frame establishing who is the viewer, the one who controls the gaze, and who is the viewed, the one who performs for the gaze. It's hysterical in the dual meaning of the phrase as the video is funny and aims to poke fun, but hysterical as well in the pathological sense in that Sanders (the artist) uses her own body to enact a display of the tragically comic. Stuffing pearls into her mouth while standing in an open washing machine: she is quite literally the poet silencing herself, suffocating in the absurdity of these iconic displays: domestic and sexually available. Pornography exists in gluts of images, it's self-engorging and etymologically, from Fr. engorger "to obstruct, block, congest," O.Fr. engorgier "to swallow, devour," from en- (see en- (1)) + gorge "throat." In other words, to strangle on that which we desire.
The "performer" in the video is ecstatic, whether she is jumping on a bed with her hands tied behind her back or caressing a giant spoon or ironing while holding Freud in one hand. The appearance of Freud in the video leads us again to Invention of Hysteria where we learn: "Because Freud listened, hysteria returned to rattle the epistemic bases of neuropathology. But Freud had to pass through the great theater of hysteria at the Salpêtrière before beginning to listen, and before inventing psychoanalysis. The spectacle and its pain were necessary; first he had to get an eyeful" (Didi-Huberman, 80). An eyeful, that's what Sanders gives us, of herself. The performative specter who then is tied to the poem. 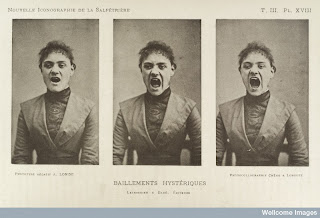 In the end of the video: the "performer" is masked. A lion mask obliterates her face as she takes what appears to be a basket of laundry outside the house. The return to the normative involves obliterating the face, hiding the face and containing the earlier exuberance or naked display. Behind closed doors, the "woman" is available; she is useful as an object that cleans and irons and also pleasing to the eye as an object that is able to be filled (with pearls) or to be gazed at in an inanimate state (corpse-like on the bed). The only babies, procreative elements that would signal her power, are reduced to king cake plastic dolls that are arranged over her abdomen as if she were a decorated float. There is no threat of real conception, no creation, and nothing to break the gaze of her role as that which is pleasurable to admire.

"We are all exposed to the prevailing ideology of our culture, and some women learn early on that they can prosper by aping the misogyny of men; these are the women who win provisional favor by denigrating other women, by playing on male prejudices, and by acting the man's woman." -Joan Smith, Misogynies

I thought a lot about how the enactment of this video depends on the normative sexuality displayed by Sanders and the accessibility of her as an object. What if the "performer" had not been "attractive," had not adhered to conventional images and forms that we find pleasing. What if the "performer" had been a person of color? How would a discussion of race have changed the dynamics, if instead of country music, the title was: I learned how to be a woman from nineties rap videos. What preconceived ideas would we imagine then as the template for what rap videos teach us about performing womanhood rather than country videos?

If they all display a performance then it truly enacts bell hooks statement: "misogynistic attitudes tend to be portrayed by the dominant culture as always an expression of male deviance. In reality, they are part of a sexist continuum, necessary for the maintenance of patriarchal social order" ("Gangsta Culture--Sexism and Misogyny).

I would go so far as to add that in relation to performative madness and the allusions to the hysterical women exploited at the Salpêtrière that being a woman always involves a performance (or several performances) and the pathology presents itself when the performance is treated as "normal." In other words, the insanity that women seem to chase is the distraction from a closer and more insidious form of insanity, which is the belief in the performance rather than a close deconstruction of how the part is played. What is portrayed as "natural" in film, books and T.V. is violence against women, is sexualization and mistreatment of women, is the ongoing fieldwork of upholding the patriarchal society that hooks reminds us: "must be labored in and maintained both to sustain patriarchy, but also to nourish an antifeminist backlash" (Gangsta Culture--Sexism and Misogyny).

I like that country music isn't a put-on for Sanders; it isn't a place to explore for some gain even as she points a critical eye at what it offers. She says in her interview: There’s no worst thing about country music, I truly love country music: what it says and what it refuses to say.  It’s so polite.  It’s so impolite.  I am utterly devoted to it, to who it made me become.  I have loved it all my life.  And this—speaking of secrets, of shame—brings me back to your very first question.  Sometimes we fall in love with what scares us most.

The poems are where the work is done though; regardless of our love or our devotion. It is our desire where we write it out, it is where we are not, which then complicates the images in the video. And Sanders' poems in conjunction with the video create a place of critique and discussion. You have to read the poems to get under the veil of the image like in  "Fancy Sung by Reba McEntire" where Sanders begins: "Fancy has a gun and I don't mean a real gun/ A man has a gun and I do mean a penis" or in "A Little Too Late Sung by Tanya Tucker" where she writes: "I walked into a gangbang and I was like/ oh shit." Sanders is not rewriting or decoding the songs for us; she's reinscribing them through the lens of her own performance stripped down. Beyond the pearls and denim, the "other" is given voice.

I think it's incredibly important to also point out that Saturday night, I went to karaoke with Kristin. And she sang "Fancy" by Reba McEntire. And it was beautiful and sexy and a woman can be a lot of things but when we're talking culture, a woman better be armed.